The meeting was very positive and went very well. All those attending were fully involved and attentive to all that was said.

There was a very moving account from a Mr Abdul Nasser, who with his wife and daughter, was one of the first refugees brought here from Syria by the British Government. He expressed gratitude to the British Government and described how the parents of himself and his wife had been killed. He had witnessed atrocities too horrible to describe or even imagine. He was assisted by local Worcestershire man of Syrian background who interpreted for him. 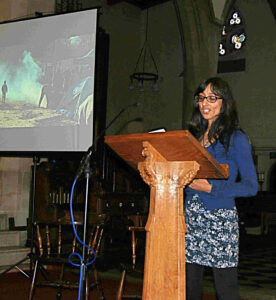 Anu Shukla of the Standard gave a moving account and showed a film of her visits to the refugee camps in Calais and Dunkirk.

Naeem Arif explained the situation in Syria, how WCC came to make its commitment and our present situation with refugees arriving soon as in the press release. He called for help, practical and financial, for our work.

Over 130 people of all faiths cultures and politics came, including from churches, the mosque, the gurdwara, councillors from both labour and conservative and nearly all giving their name and contact details offering help.

A very encouraging meeting, So Redditch will be a welcoming town.